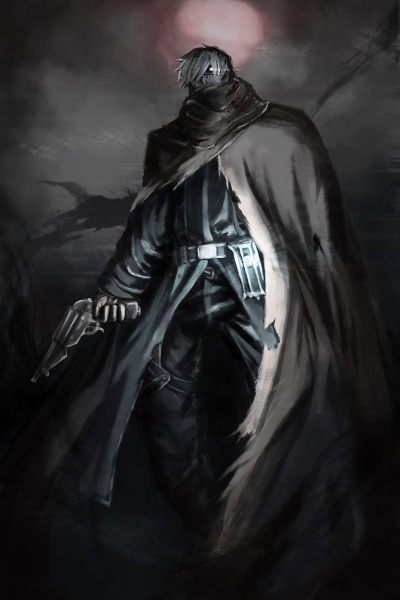 Physical Appearance
A very large lanky man with an Always grim looking face, He sports crystal blue eyes and pitchblack hair. His face usally riddled with all sorts of gnarly wounds or marks from past battles, He seems to have many "open" augmentations on his head, and sports a synthetical body with Augmented limbs and when arround Civil usally sports long Coats or Greatcoats, on Duty he wears a Dated form German Military Gear from the past Apocalypse war with Russia. The armor has been retrofitted with Horizon Technology and communication devices.
However the men is always a slow moving Juggernaut that seems always Armored like a Armored Vehicle, cautios and slow he approaches.

He usally Carries a Large caliber Pistol on him usally concealed, or a German Enginered Large Caliber Assaultrifle.

Current Information
Hans is being Deployed as a Heavy Support Unit in the Horizon Police and Security force and as a low ranking field NCO.
In his Synthetical body he usally takes over NCO roles and Organises district Control, however if Heavy unit support is required he himselfs vanishes from the streets and Connects with a Horizon Heavy Support Drone fitted for him specialy that he then controls. It seems however he is unable to control such a big Drone and his body at the same time so it is likely his body is "unconcious" while operating the Drone.
He is also known for lacking restraint or mercy in face of Harder Crime or Resistance and usally executes everyone on the spot if no other Officers are on spot, However he seems to show a kind heart to those rightous of mind and respectfull of mannerism.
He seems to have a bottomless pit of Hate for every citizen and soldier of Britannia that Destroyed half of Germany his home he defended in two wars.
He is also nicknamed "The Undying" as in CasCadia he faced manytimes Fatal Wounds or nearly complete body Destruction but always came back alive either in battered body or completly rebuild with cold steel, which is that people say if you attack him then you have to make sure he is dead otherwise people say the "Gespenstjäger and his blue whil o whips will come hunting you in the foggy streets of shibuya until you take your last breath"

History
Most is unkown and has to be asked in person however one thing is widely known about the Men if you Spot a dim blue light amonst the fog you have to run as fast as you can as for "They will be heralded by the blue light of the Will of the Wisp!" to bring justice.​
Last edited: Nov 29, 2020
You must log in or register to reply here.
Share:
Facebook Twitter Reddit Pinterest Tumblr WhatsApp Email Link